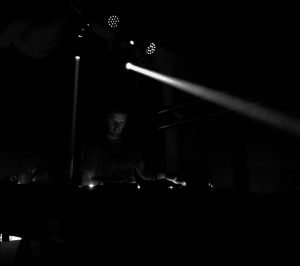 After experiencing the explosion of house music in the UK in the late eighties Bill started DJing professionally in 1992 whilst living in Paris. He played regularly at the ‘immense’ parties held at many of the best nightclubs in Paris: Elysees Marbeuf, Folies Pigalle, Elysee Monmartre, Cave de Clichy, Le Rex, Le Bataclan… He also embarked on a two-year weekly residency at the renowned Parisian Sunday session Jellybabies.

Returning to England in 1995 he began working for the original DJ mix compilation series Journeys by DJ for whom he continued to play at JDJ tour nights around the country. This culminated in a monthly DJ residency held at seminal London underground club The End, a breeding ground for the most prolific house and techno artists of its time.

In 1997 Bill took over A&R and label management at The End label End Recordings. He also ran the legendary Mr.C imprint Plink Plonk. He was responsible for the development of the critically acclaimed album Low Life by the infamous Layo + Bushwacka! and was an integral part of developing founder and club resident Mr.C’s debut artist album. This was coupled with his burgeoning presence at the label’s mother club The End, where Bill played with artists including Derrick Carter, DJ Sneak, Deep Dish, Dave Angel and the ubiquitous Mr C and Layo + Bushwacka! among others. Bill hosted the End Recordings room at Subterrain where he was joined by Miguel Migs and DJ Rasoul (Naked Music), Drop Music, Hernan Cattaneo, Charles Webster to name a few.

Bill has also played at numerous international festivals over the years and was resident DJ on MTV European tours including Ibiza where he played for Sónar at the 15,000 strong MTV event at Privilege, as well as a DJ set between the concerts of Gorillaz and Morcheeba on the main stage at the Isle of MTV event in Lisbon and the MTV European Music Awards after party in Barcelona.

In 2003 he created Shakes Records and released numerous highly acclaimed 12’s and toured to promote the label before deciding to put life in music on hold to do some traveling. After returning to Europe in 2005 he relocated to Barcelona where he currently resides.

In 2017 he recorded a special mix for the Lapsus Radio show on Spain’s National Radio 3 and more recently Bill has been focusing on honing his production skills but can still be found playing in Barcelona, London, and Ibiza (for Finca am for whom he has played sets at Pacha and the Dance 88/89 nights, among others, and has a monthly mix on Ibiza Global Radio).

As well releasing edits, remixes and tracks under various monikers he continues to run Shakes Records, featuring his own material as well as tracks from like-minded producers and friends.